National Weather Service Des Moines partnered with the Polk County Health Department for a vehicle heat demonstration on June 9th. Hydrometeorological Technician Brad Fillbach installed a Maximum-Minimum Temperature System (MMTS) radiation shield and display unit in a GOV vehicle. The demonstration showed how quickly the temperature inside a vehicle can change in a short amount of time. Polk County Health Department Educator and Public Information Officer, Nola Aigner assisted with describing the health impacts to children and pets. The demonstration was attended by local television stations and broadcast live by UnityPoint Health through their Facebook page. 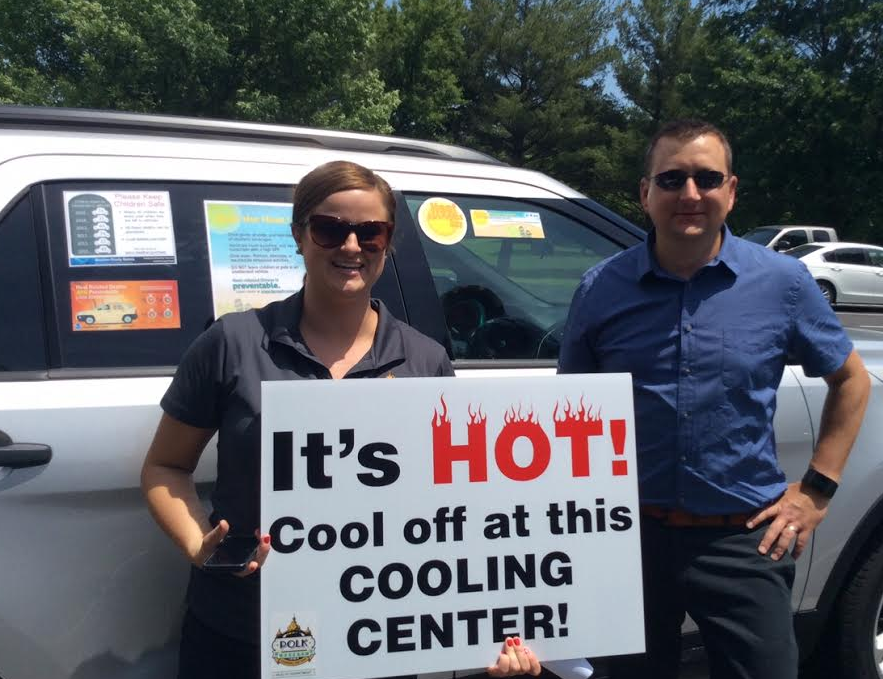 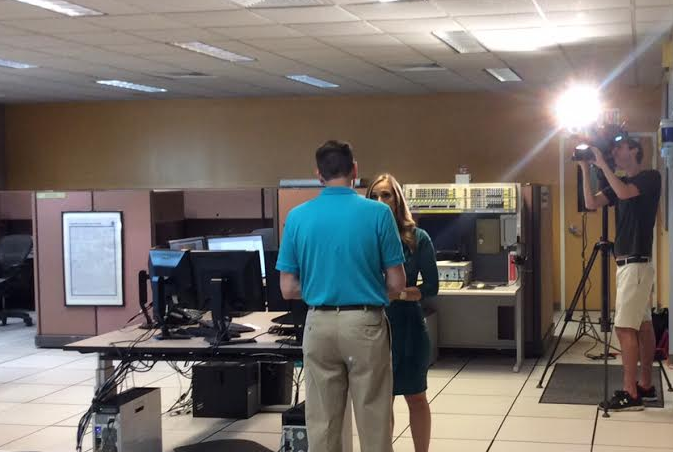 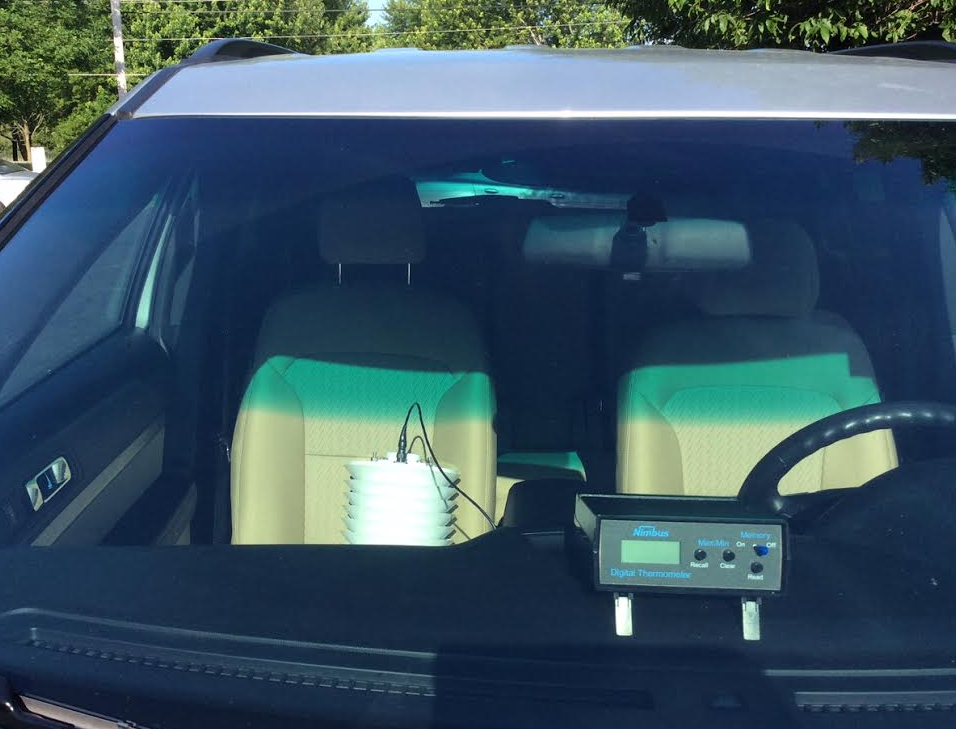 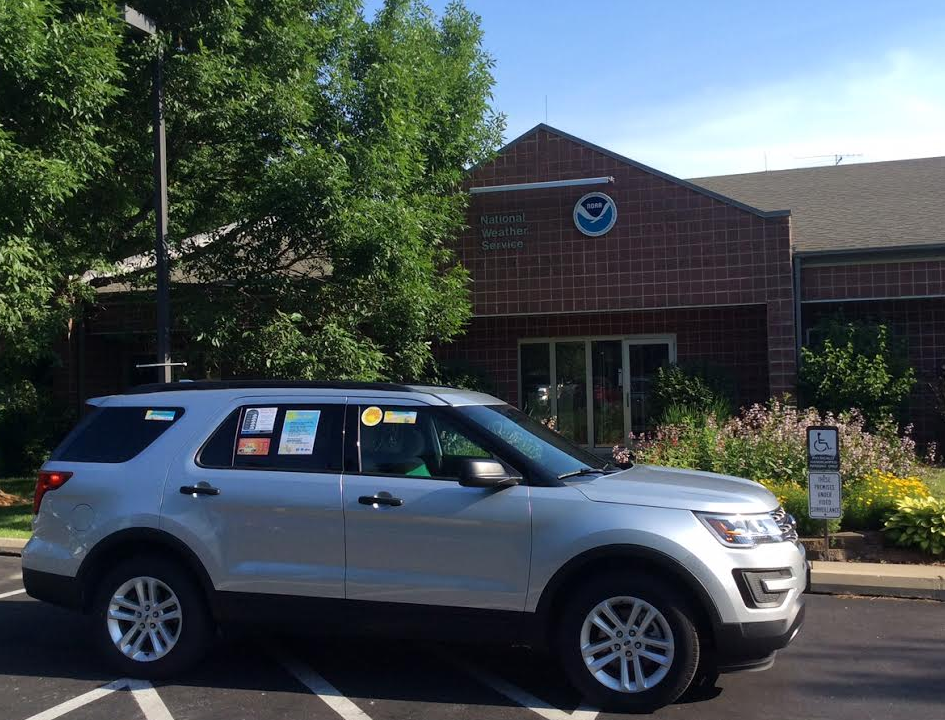 The NOAA/National Weather Service’s goal of building a Weather Ready Nation is all about building relationships with our core partners including emergency managers, first responders, government officials, businesses and the general public and helping them make better decisions to save lives and property and enhance livelihoods.  Communicating with everyone can be a daunting task as the National Weather Service in Des Moines has contact information for thousands of core partners and over 4,700 SKYWARN severe weather spotters.

One of our newest tools to help gather and disseminate information is called IRIS which is an acronym for Integrated Real-time Impacts and Services.  This is a web based application that integrates current weather data and keeps a database of all contacts allowing our staff to call partners and spotters and disseminate Local Storm Reports quickly and easily with just a few clicks of a button. With IRIS, spotters can note their information by name and/or spotter number with their report sent out in just a matter of seconds.  Under previous software, severe weather reports would need to be located with other geocoding software before being sent to the media and the world.  It also has the capability of parsing out subsets of our large database and emailing those folks when necessary.

IRIS also monitors dozens of local observations alerting NWS staff of critical wind speeds and precipitation accumulations and making that information easy to disseminate with just a few clicks of a mouse.  Future capabilities also include enhancing our ability to provide critical Decision Support Services to our core partners by cataloging key events and impacts important to them. Operational staff will be notified when weather elements reach critical levels.

In order for IRIS to work efficiently and optimize its information our partners and spotters need to have current location and contact information noted. If you are a member of one of these key groups and have had your address, phone number and/or email address change recently please let us know so we can update our information and database. Residents of west-central Iowa may remember the powerful squall line that tore across the region on the evening of August 31, 2014, leaving a wide swath of wind damage from Crawford to Dallas counties.  More intermittent wind damage was reported from Greene to Howard counties.  In the days following the event, the NWS reviewed the wind damage reports/photos and could not conclusively distinguish any damage that could have originated from a tornado.  Tornadoes produced by squall lines are oftentimes weak, transient, rain-wrapped, and sometimes embedded within broader straight-line winds, making it very difficult to differentiate tornado versus non-tornado damage in post-storm ground surveys.  Mature corn crops can play a vital role in showing the unmistakable convergent path left by a tornado, and two tornadoes from August 31 were located by the author in cropland on a scientific survey on September 10, 2014 (see photo below). Convergent damage path through corn for one of the ground-surveyed tornadoes on September 10, 2014 just north of Dayton in Webster County.

However, in the weeks following the event, entire 350-km path of the squall line was imaged at ≈1-m resolution using aerial photography through the USDA National Agriculture Imagery Program.  As stated earlier, the predominantly flat, mature agricultural land cover of central Iowa provided an excellent medium on which to document all scales of wind phenomena.  The imagery (discovered and analyzed during the last 6-8 months) revealed an astounding 111 discrete damage tracks that could have originated from a tornado.  These tracks ranged in length from a mere 130 m to nearly 18 km.  Given the uniqueness of this dataset and the high likelihood that some of these tracks were from surface vortices that did not meet the formal definition of a tornado (a circulation reaching to cloud-base), a probabilistic testing scheme was developed.  This test weighted various track characteristics (length, strength, circulation nature, and damage) and radar data to determine which tracks had the highest chance of being from a tornado.  Using this test, 35 of the 111 tracks (31%) were classified as tornadoes.  Four of the tracks were rated EF-1 using the aerial data and the rest as EF-0. Imagery collage of nine tracks from August 31, 2014, highlighting the wide variety of damage patterns observed. Track direction and identification numbers are provided with each event. All images rendered to the same scale.

The sheer number of damage paths revealed by this dataset is truly unprecedented.  No other study has ever uncovered so many tracks produced by a single squall line.  The aerial data also showed two tornadoes merging into one single entity just northeast of Stratford (see image below), one of only four mergers ever documented and the first with tornadoes from a squall line.  This event unearthed far more questions than answers, not only concerning how these tornadoes formed, but also with how the NWS should handle these types of situations.  Using hypothetical tornado warnings that would have encompassed the area most at risk to tornadoes on August 31, it was calculated that only 0.24% of the warning area would be impacted by a tornado.  Should the NWS be issuing tornado warnings for these low-impact, short-lived tornadoes that would rarely cause damage greater than EF-0/EF-1?  Is it worth false alarming over 99.8% of the warning area to try to capture these fleeting tornadoes that would likely go undocumented?  In addition, how should the NWS document such tornadoes for historical records?  Since aerial data will not be available for all events, a bias would be introduced into Storm Data.  The August 31, 2014 squall line exemplifies this bias to the extreme.  To put this event in context, the 35 tornadoes from August 31, 2014 would rank as the single greatest tornado outbreak in Iowa history, an outbreak that no one has ever heard of!  These questions and more will need to be addressed by the NWS over the coming years not only as the organization moves towards impact-based warnings, but also as the availability and accessibility of aerial/satellite imagery datasets increase.  This case highlights the incredible utility of aerial and satellite datasets for storm surveying, a benefit that the NWS will hopefully capitalize on in the years to come. (a) Polygon paths for tornadoes 62-T19 (red) and 64-T21 (blue) with the start and end times (in UTC) for each tornado annotated. Local streets are provided as a map background. The black dotted outline denotes the region encompassed by the aerial imagery shown in (b) of both track crossing points and the merger, with the estimated times of the first crossing point and merger noted. Tracks are outlined and in the same colors as (a). (c) Close-up imagery of the merger point with different stages of the merging process highlighted.

NWS DMX has been providing support for many partners through our Decision Support Services (DSS) for several years, and this year has a new tool to help with this support, the DSS Events Calendar. This tool is being rolled out across the Central Region NWS offices so each office has a consistent baseline for partner support. The calendar works by NWS partners such as Emergency Managers (EMs) providing input about their events through a web-based form. This information is then organized into a web-based calendar so that our office and meteorologists are aware of each event being held across our county warning area. These events tend to be outdoor events that gather a large attendance which are most vulnerable to the impacts of weather, and more specifically severe weather.

Many days several events are ongoing across Central Iowa with as many as 15 to 20 on one of the busier days. NWS DMX meteorologists stay aware of these locations while issuing warnings and can place special statements in the severe warnings about the outdoor event locations that may be occurring in a warned area. The event location is included in the input and then is directly loaded into the office computer system used to issue warnings, so that these event locations can be included in a warning if necessary.

County Emergency Managers maintain contact with our office throughout the event as well, by logging into a chat program or via the phone to obtain the latest information about any threatening weather. If requested by an EM, NWS DMX will also provide a localized briefing detailing any hazardous weather that may be expected throughout the duration of the event. One example is a video briefing held with the Jasper County Emergency Management officials for high-attendance races held at the Iowa Speedway, another example is a daily email briefing during RABGRAI provided to public safety officials, County EMs, neighboring NWS office management, and regional NWS management.

This tool has allowed NWS DMX to streamline its operations regarding event support to the local county officials, helped NWS DMX meteorologists to maintain awareness of these large events in case hazardous weather is approaching, and help keep everyone safe so they can enjoy these events to their fullest.

If you have weather hazard concerns for an event, please contact your county emergency coordinator who will work with the National Weather Service before and during impactful weather conditions.