A cold snap occurred during the first five days of May as a few spots reported light frost on the mornings of the 2nd, 3rd, and 5th (See Figure 2).  However, by the second week of May, temperatures were above normal with a few locations topping 90°F for the first time in 2016 in Iowa. Marion, Guttenberg, and Hawarden reached 90°F on the 6th. More cool temperatures filter into the state from the 12th to the 21st.  In fact, freezing temperatures were recorded on the 14th, 15th, and 18th with the coldest day and most widespread frost occurring on the 15th (See Figure 3). Cresco, Decorah, and Elkader all recorded 27°F low temperatures on the morning of the 15th.  The remainder of the month, temperatures finished above normal with a string of 10 consecutive warmer than normal days. The hottest temperature was 89°F in Little Sioux and Lamoni on the 30th. 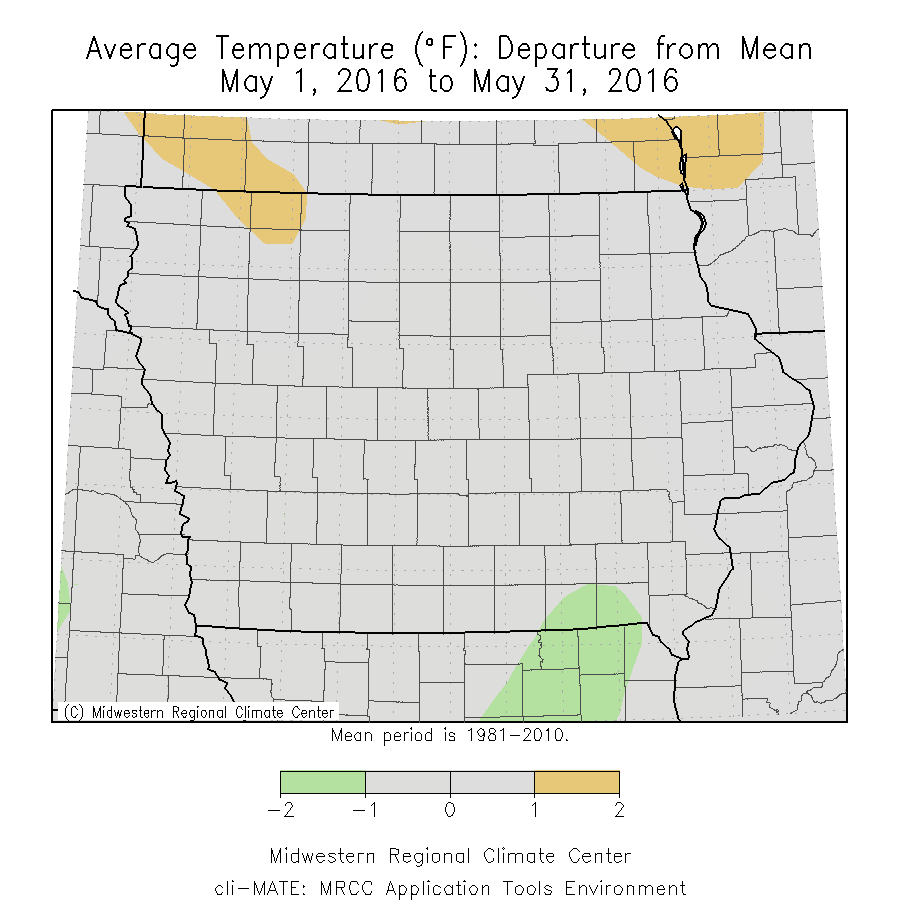 Average Temperature Departure from Mean for May 2016. 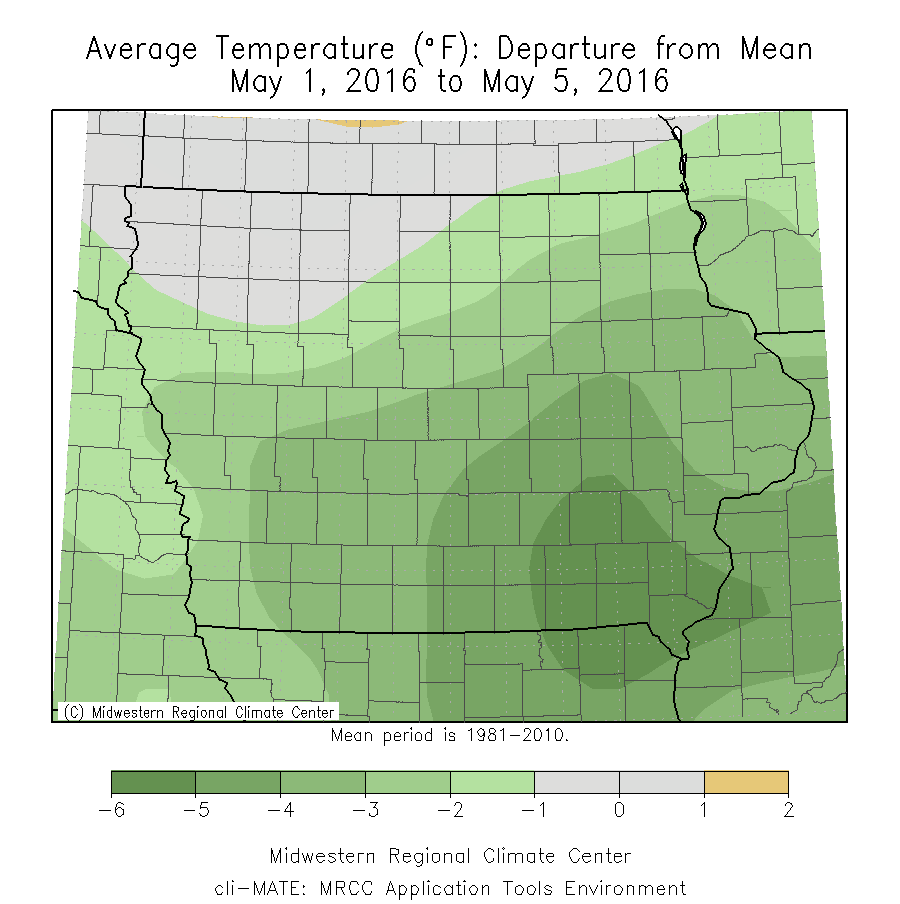 Average Temperature Departure from Mean for May 1-5, 2016. 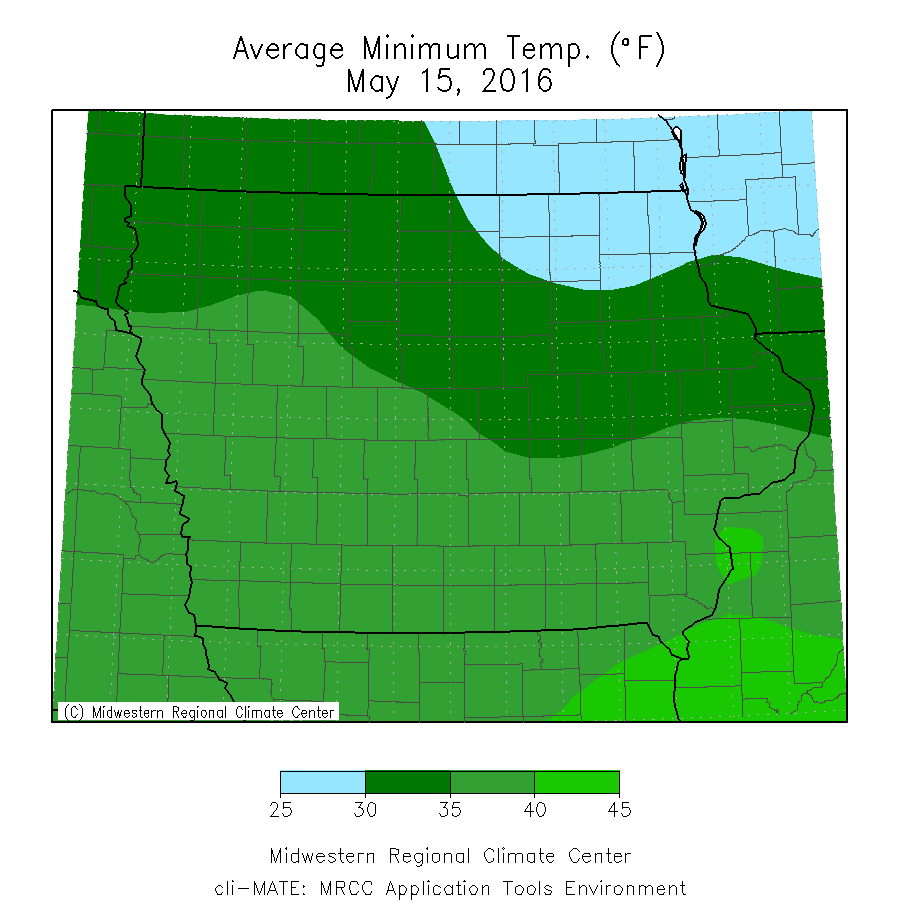 Average Minimum Temperature Departure from Mean for May 15, 2016.

The statewide average precipitation for May 2016 was 4.64 inches or 0.08 inches above normal. This ranks as the 52nd wettest May among 144 years of statewide climate records. Des Moines was 0.62 inches below normal for the location’s monthly precipitation as it totaled 4.12 inches. Waterloo totaled 3.24 inches of rainfall for the month of May, which was 1.29 inches below normal.

The first day of May was cool and wet before generally dry weather prevailed from the 2nd to 8th.  From the 9th to the 13th, a wet period settled into the state with several weak systems that brought light to moderate rainfall. The highest precipitation accumulated over southwest Iowa (See Figure 4).  A couple of brief tornadoes were spotted in Davis and Guthrie Counties County on the 9th, mainly damaging crops and trees. Another relatively dry period dominated the middle of the month from the 14th to the 22nd before a fairly active weather pattern developed to finish off the month. Severe weather plagued the state every day during the final week of the month with the most active night occurring on the 25th. Widespread damaging winds along with some large hail were reported in 19 counties across the northern two-thirds of Iowa. The dries weather was found over central to southeast Iowa, while the bulk of the monthly precipitation accumulated over northwest to southwest Iowa (See Figure 5).  The highest monthly precipitation was 10.75 inches at Atlantic while the lowest monthly total was 2.19 inches in Albia. In fact, Atlantic’s total was its 2nd highest total out of 130 years of records. The highest total is 12.37 inches set in 1903. 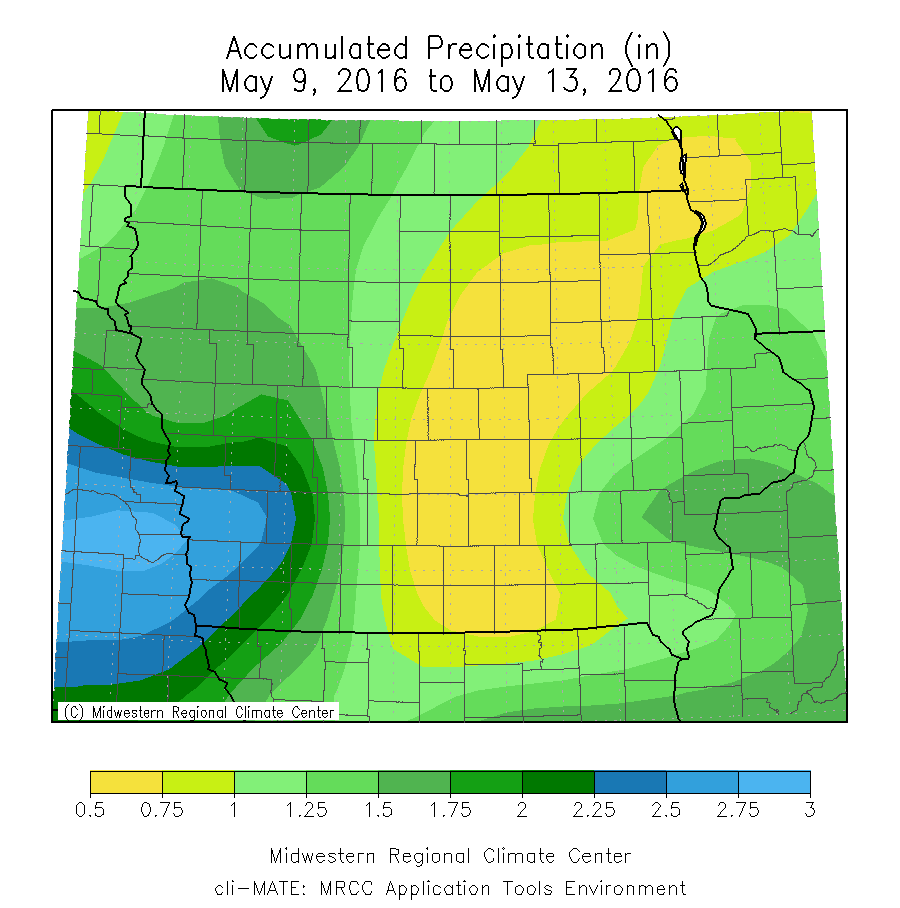 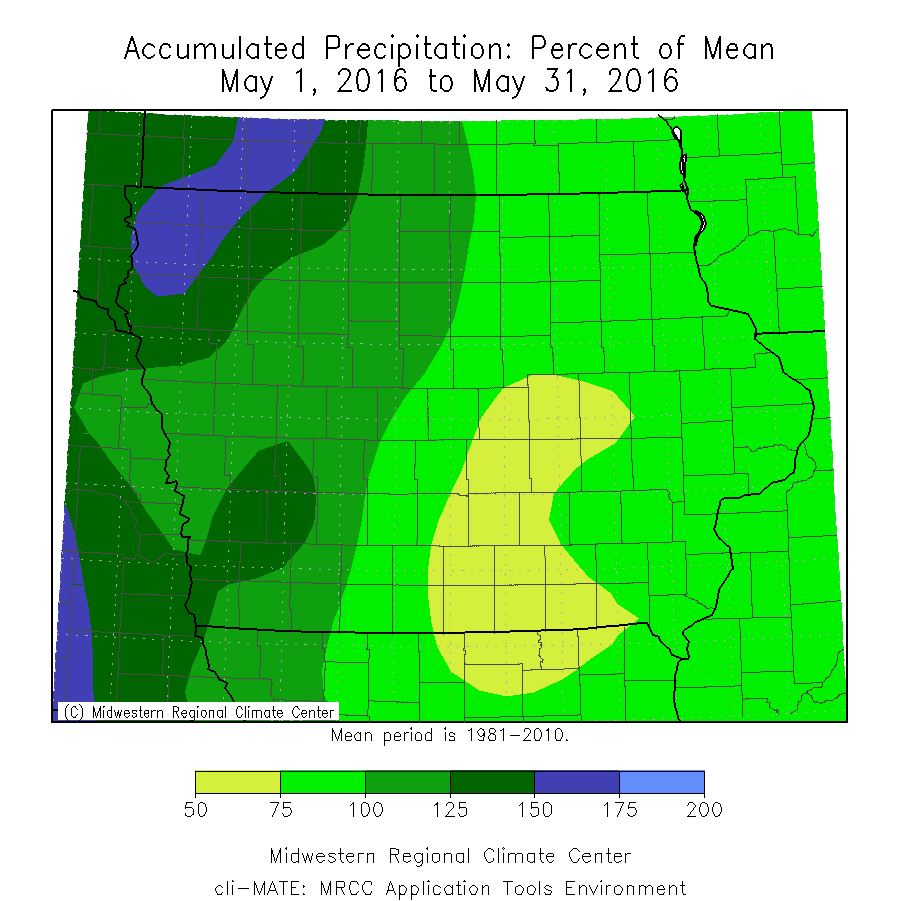 Accumulated precipitation percent of mean for entire month of May 2016.