The 2017 Water Year will go down as one to remember due to record precipitation, record snowpack, and significant flooding that impacted the state. Extreme wet conditions resulted in a number of disaster declarations due to snow, flooding, and landslides, along with runoff volumes not seen for decades across portions of southern Idaho.

The Water Year started off with a bang as a series of Pacific storms brought record precipitation to the region in October 2016, recharging the soil moisture and setting the stage for abundant spring runoff. Winter was highlighted by very cold temperatures across the state, and extreme snowpack across much of southern Idaho.  As temperatures warmed during late winter and early spring, low and mid elevation snowmelt combined with rain, on top of saturated and frozen soils, led to widespread flooding across the Magic Valley, the Upper Snake Plain, and extensive flooding and landslides across northern Idaho.  This was followed by significant flooding on several main stem rivers and tributaries of central and southern Idaho later in the spring.  Water managers were challenged by the extreme runoff and many regulated and unregulated river systems experienced prolonged high flows and flooding. On a positive note, reservoir systems were filled to capacity resulting in plenty of water for the growing season and above average carry-over heading into 2018.

Despite the cold winter, compared to the 30 year normal, temperatures over the entire 2017 Water Year were above normal for most of Idaho with the greatest anomalies across the southern half of the state.  Water Year precipitation was 110 to 200 percent of normal for almost the entire state. Near the end of the snow accumulation season, snowpack was around 100 percent of normal in northern Idaho while many basins in central and southern Idaho were carrying 150 to 200 percent of normal snowpack. Despite all the water the state received, hot and dry summer weather allowed for a return of moderate drought to portions of central and northern Idaho with streamflows in some basins falling below normal by summers end. Despite one of the coldest winters in recent decades, temperatures experienced over the entire 2017 Water Year ranked either above or much above normal.  After a relatively warm fall, well below normal temperatures persisted across low elevations for most of the winter months which allowed the low elevation snowpack to accumulate to unprecedented levels in some of the lower valleys. For some locations in northern Idaho it was the coldest winter in over 30 years. The extreme cold led to ice jams which resulted in flooding on some rivers and streams across the state.  For the entire water year, statewide temperature anomalies generally ranged from minus 1 to plus 3 degrees (F). Last year’s anomalies ranged from plus 2 to plus 4. Above normal temperatures during late winter and spring had a significant impact on the ripening of the snowpack which led to extreme melt rates and flooding in many areas. Had it not been for below normal temperatures experienced during the early winter months, anomalies for the year as a whole would be greater. Fall rains were well above average across most of the state, excluding the southwest corner. Record setting rainfall in October was key in recharging soil moisture and setting the stage for an excellent runoff season in the spring. An active winter ensued with percentages varying between 150 and 300 percent above normal across almost the entire state. This was largely due to numerous atmospheric river events that battered the Pacific Coastline, bringing ample moisture to the region. The first and second quarters of the 2017 Water Year therefore ended on a high note. Spring and summer precipitation percentages were largely lower than in the previous months, save portions of the Central Mountains, Eastern Magic Valley and the Upper Snake Plain, which still received above average precipitation. Summertime thunderstorm activity was somewhat limited for most of Idaho. South central and southeast Idaho was the exception, with bouts of monsoonal moisture bringing normal or above normal precipitation. The 2017 Water Year snowpack was quite healthy and hit record levels across portions of southern Idaho. Winter storms brought heavy snow to southern Idaho in December and January, not only to the mountains, but to the lower valleys as well. Southern Idaho snowpack ranged from around 100 to 160 percent of median by February, while northern Idaho snowpack was lagging at around 80 percent.  Snowpack in the Big Wood, Little Wood and Big Lost Basins reached 180 to 190 percent of median by early March; daily records were seen at many SNOTEL sites in the central Idaho mountains. By April 1 (when Idaho’s overall snowpack typically peaks), basin snowpack ranged from 95 to 170 percent of median statewide, with the highest percentages in southern Idaho. Runoff from low and mid elevation snowmelt in February and March caused widespread sheet flooding in the Magic Valley and across portions of the Upper Snake Plain. Rapid snowmelt, record rainfall, and saturated soils led to extensive flooding and landslides across northern Idaho in March and early April.  Record or near record high elevation snow and extreme melt rates led to prolonged flooding on many rivers and streams across the central mountains during the spring. Wet fall weather and a large winter snowpack made for a challenging spring for reservoir operations.  Not only was the snowpack well above normal, but extreme snowmelt rates occurred leading to very large inflow peaks on some of the reservoir systems. Operators for large federal reservoirs and smaller privately owned reservoirs were taxed in keeping up inflows and flood control space. Some of the smaller privately owned reservoirs in southern Idaho were pushed to the brink on their reservoir capacity. Flood flows occurred below a number of reservoirs in southern Idaho, with 101 consecutive days of flood flows below Lucky Peak Dam on the Lower Boise River. Owyhee Reservoir was filled to capacity for the first time since 2011. By late spring, flood control operations ceased, reservoirs were full, and an abundant supply of water was available for the growing season along with above average carry-over in most systems for the start of the 2018 Water Year. Runoff volumes ranked near the top of historical records across most of southern Idaho, with record volumes at some locations fed by central mountain snowmelt. Record October precipitation pushed monthly streamflows above average across much of central and northern Idaho in the fall of 2016. Cold temperatures and low regulated flows, typical of winter, held streamflows at or below normal across most of Idaho in December and January.  A dramatic increase in streamflows occurred in February and March as warming temperatures initiated low and mid elevation snowmelt which was accompanied by periods of rain. High elevation snowmelt sustained the high streamflows through the spring and even through the summer across portions of central and southern Idaho.  Hot and dry weather allowed some basins to recede below normal during the summer months, particularly across northern Idaho. Wet weather during the fall and winter eliminated the abnormally dry conditions and pockets of moderate drought that were present at the beginning of the 2017 Water Year. However, above normal summer-time temperatures and below normal precipitation allowed areas of drought to redevelop across portions of central and northern Idaho by summers end. 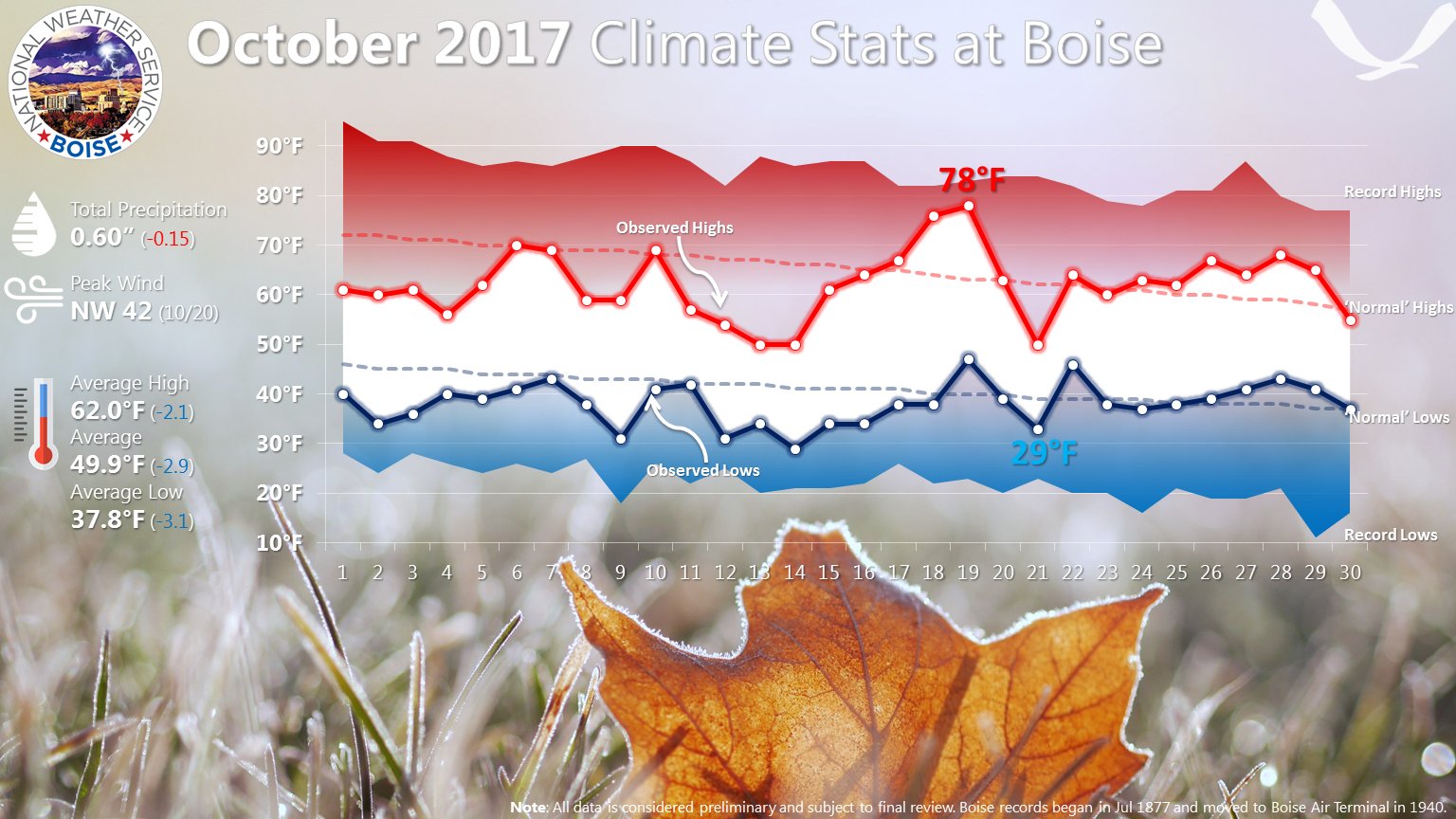 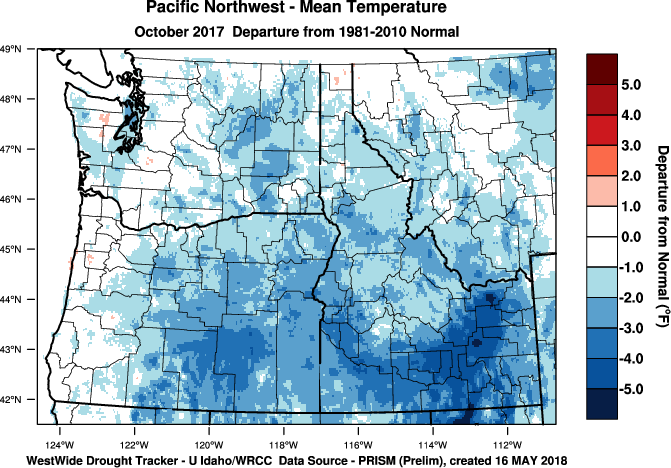 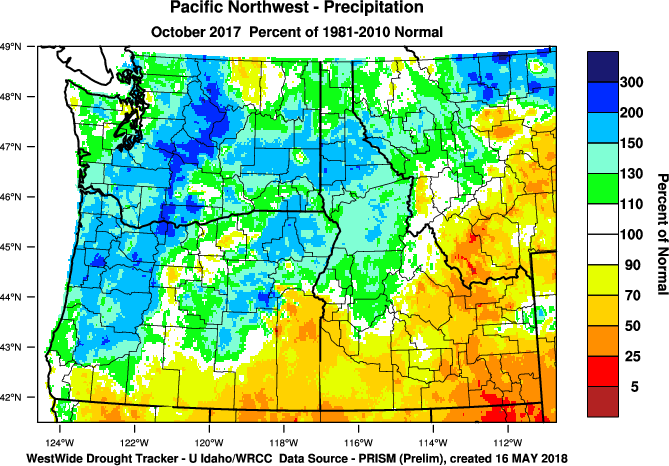